It’s What We Do In Life!

It’s What We Do In Life

I got a basic apprenticeship in how to lead and manage in life in the U. S. Coast Guard. Twenty-five years after my service in the Coast Guard, I was at the White House, on Flag Day. The organization that I was the CEO of was receiving an award from the President and Vice President for finding innovative private solutions to public problems. It was the President’s Citation Program for Private Sector Initiatives. 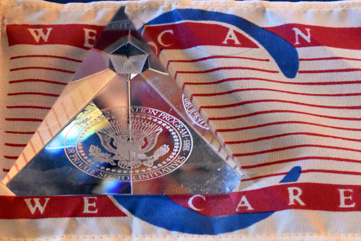 Yet it took me thirty-five more years to realize that it was my time in the Coast Guard, aboard the weather cutter Owasco, that provided a solid foundation for leading and managing that helped make my life—and that award—possible. For me, that’s one major benefit of being a veteran, in addition to spending some time in service to the nation.

I joined the Coast Guard while in high school and began active duty as a seaman apprentice a year after graduation. That included a short stay at the Montauk Lifeboat Station, storekeeper school, and then on the Owasco for about twenty months. I was promoted to seaman, SK3, and recommended for SK2 during that time. I left the ship after two years to begin college.

I earned an AAS degree, a BS in Education, teacher certification, got married, and began a career in Chamber of Commerce management. Several years later, I earned a MBA in executive management, which was paid for, thankfully, by the GI Bill. At the time, I remember feeling somewhat surprised that the work in getting a MBA was not all that difficult; I had not yet realized how good a foundation for organizational leading and managing I received during my life and work aboard the Owasco in those two years. Since that time, I continued to learn about leadership and management from many people and have had the opportunity to put this learning to good use in the organizations that I’ve been involved with over the years. Now that I’m retired, I have had time to reflect on past experiences and was surprised to realize that the core, foundational learning that I have found essential to my being effective in life and work traces back to my two years of active duty in the Coast Guard. It was a great apprenticeship for life in the world!

In my time aboard ship I was living what I was later taught about over several decades of work and study by a number of very special experts in people and quality focused management. I came to realize that seven foundation stones were laid in my Coast Guard life for leading and managing in the world:

1.      Organizations are complex responsive processes of people relating to themselves, other people, tasks, duties, visions, missions, purpose, community, nation and the world.

2.      A community is based on a shared perception of right and wrong and is only developed through conversation that includes people with competence, authority and interest in the common good. It is demonstrated by deeds done and not words said.

3.      Leaders are the people who recognize what the right needs are and are able to bring together the right people and resources to set and accomplish the right common goals.

4.      We are, simultaneously, independent, dependent and interdependent beings.

5.      Freedom and security requires the willingness and ability to stand up and fight for what is good and right.

6.      Good management has to be process and systems based with a focus on quality, customer service, and performance excellence. Sustainable corporate life has to include respect and care for the well-being of self, crew, ship, community, environment, nation and world.

7.      Individuals, teams and organizations need to be attentive to and practiced in the three “R’s” of being Ready, Relevant, and Responsive to the times, needs, tasks and environments they are in.

(This 7th cornerstone came recently to my realization, from a “challenge coin” given to me by Admiral Karl Schultz, Commandant of the Coast Guard, with the words Ready, Relevant, Responsive emblazoned on the life-ring on one side of the coin.) 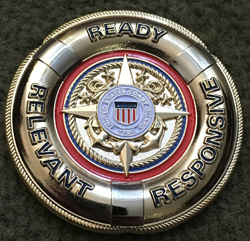 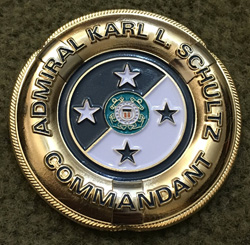 The motto of the Coast Guard is Semper Paratus, “Always Ready.” It’s a good motto and ambition. Admiral Schultz added Relevant and Responsive to it for his command—a vital addition for today’s times; and I add it to mine.

I could not have articulated all of this six decades ago, in those informative and formative years that began my life’s work. Only now do I more fully recognize and appreciate that my Coast Guard experience created a good foundation for what became a career in organizational management for total community development. And now that I’m aware of it, I find myself even more grateful for the Coast Guard and my time in it. I’ve always liked the motto, Semper Paratus, “Always Ready.” Life in the Coast Guard, in my experience, exemplified that in thought, word, and deed. I entered the Coast Guard while in high school, a seaman apprentice; I left three years later, having gotten a life apprenticeship. I’m thankful for that learning and experience.

Larry Smith is Principal of The LeaderShip. He is a presidential-award winning chamber of commerce CEO (for finding innovative solutions to public problems), a teacher/facilitator in organization management, and Editor of a quality- and systems-thinking management journal.
View all posts by Larry Smith →
Leadership in Life and Work apprentice, C Flag, Challenge Coin, Coast Guard, veteran